The Canola Council of Canada advises that canola should be sown with high seeding densities and preferably using larger seed size (up to 2.2mm). Moreover, seeding later in the season should be considered rather than seeding on earlier dates. Briefly, greater plant densities produced by high seeding rates compensate for flea beetle leaf damage. More tolerant seedlings to flea beetles have been observed to be affected by seed size and canola sown mid-May to early-June. Late sown less affected by flea beetle damage than canola seeded in late-April to early-May. Currently, there is limited research showing how all these recommendations, acting in conjunction, affect canola production. Therefore, this study aims to evaluate the impact of seeding rate, seed size, and seeding date on flea beetle damage and populations. Furthermore, a split-plot factor analysis will also allow us to examine interaction effects between seeding rate, seed size and seeding date. Further insight on interactions effects will allow us to measure the true flea beetle response to these recommendations, and provide new recommendations based on these possible interactions.

The objective is to evaluate the impact on flea beetle leaf damage and flea beetle population of seeding date (late-April to early-May and second to third week of May), seed size (small, large and unsorted), and seeding rate (112,56 and 168 plant m-2) 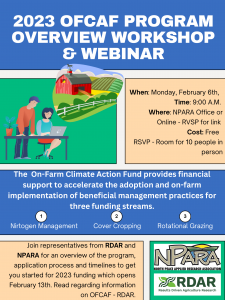 Either join us in person for some coffee with your laptop or online to go through and prepare applications for the On-Farm Climate Action Fund that opens up February 13th.

Funding for this project (in part) has been provided by Agriculture and Agri-Food Canada through the Agricultural Climate Solutions – On-Farm Climate Action Fund.

Join us in-person at the Rycroft Ag Centre on February 8th for a full-day event on improving soil health and nitrogen efficiency. Featured speakers at Dr. Kris Nichols and Kimberley Cornish.

How is Soil Carbon measured? How is it carbon within the soil in regions documented? How does mapped soil carbon help me and my farm?
Do you have these questions?